Go Up to Setting parameters

You can create a simple application to understand how to use the DataSource property to link a query in a master-detail form. Suppose the data module for this application is called LinkModule, and that it contains a query component called SalesQuery that has the following SQL property:

Suppose, too, that this application has a form, named LinkedQuery that contains two data grids, a Customers Table grid linked to CustomersSource, and an SalesQuery grid linked to SalesSource.

The following figure illustrates how this application appears at design time: 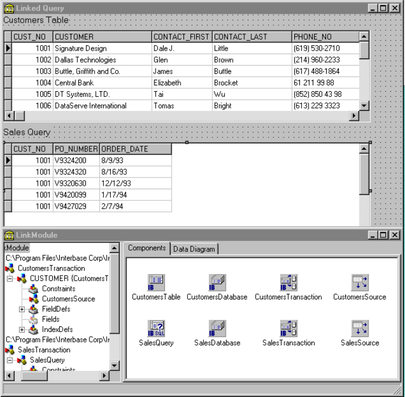 Note:
If you build this application, create the table component and its data source before creating the query component.

If you compile this application, at runtime the :Cust_No parameter in the SQL statement for SalesQuery is not assigned a value, so SalesQuery tries to match the parameter by name against a column in the table pointed to by CustomersSource. CustomersSource gets its data from CustomersTable, which, in turn, derives its data from the CUSTOMER table. Because CUSTOMER contains a column called “Cust_No,” the value from the Cust_No field in the current record of the CustomersTable dataset is assigned to the :Cust_No parameter for the SalesQuery SQL statement. The grids are linked in a master-detail relationship. At runtime, each time you select a different record in the Customers Table grid, the SalesQuery SELECT statement executes to retrieve all orders based on the current customer number.