Note: This document describes a past release.

The release of C++Builder 64-Bit Windows is also Update 1 for the RAD Studio XE3 release, which includes both the Delphi and the C++ personalities.

Highlights of This Release

There are significant differences between BCC32 and BCC64, and you will need to make some changes to BCC32 applications when you migrate them to BCC64.

You can see the PCH.h file as a node in the Project Manager: 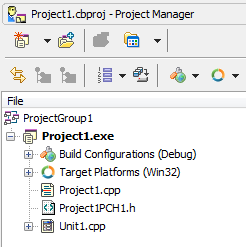 Installation Requirements Note: On a 64-bit Windows system, you might need 3 Gigabytes of free space for the Boost Libraries, and 18 Gigabytes of free space for the product installation, in order to ensure that the Boost Libraries are correctly installed. Installing Boost Version 1.50.0 requires considerable extra disk space beyond the space required for Boost Version 1.39. Keep in mind that both versions are installed on 64-bit Windows development systems, and for Version 1.39 both a Win32 and an OS X version are installed.

Other Notable Features of BCC64

DataSnap and dbExpress are supported by 64-bit Windows C++. However, legacy 32-bit database software such as BDE and DBX are not supported.

to be as follows:

BCC32 Extensions are Not Supported by BCC64

This includes keywords and extensions with single underscore, such as:

The workaround is to use the form with the double underscore, such as __fastcall.

The Project > Options dialog box in the IDE has some changes to accompany the release of the 64-bit Windows C++ compiler.

How to Find the Supported Target Platforms for Each Compiler Option

You can see the supported target platforms for the various C++ compiler options either in the help or in the IDE, as follows: