The default alignment of field instructions for Delphi has changed from 8-byte (Quad Word) to 4-byte (Double Word) boundaries to match iOS requirements. This change affects Delphi iOS apps that are to be used with C++.
You need to recompile and rebuild your existing Delphi iOS projects (from XE5 Update 1 or earlier).

Be aware that when you recompile, an error might occur if the project contains DCUs (or object files or libraries) for which the source is not available on the search path.
Beyond this, most users might never need to deal with this change.
However, if you require a particular record size, you can reset the Record field alignment option on the Project > Options > Delphi Compiler > Compiling page for expedience.
For example, you can set the alignment to Double Word (8 bytes, equivalent to {$A8} or {$A+}).
Keep in mind that you might subsequently need to recompile your Delphi iOS project with the new 4-byte boundaries, and if this happens, you should set the Record field alignment to Word (equivalent to {$A4}) on the Compiling page.

Using Mobile Preview allows you to:

The application samples now have folders for Delphi and C++ (CPP) under the FireMonkey and FireMonkey.Mobile categories. The help pages for the affected samples have been updated with the correct location information. For example, see FMX.ImageSpin Sample and FMX.Mobile.ScrollableForm Sample (C++).

For more information about the samples, see Samples Descriptions.

If you are recording from microphone with TCaptureDeviceManager.Current.DefaultAudioCaptureDevice (as is done with the AudioRecPlay mobile code snippet), you need to save files using the following file extensions:

Some refactoring has occurred in the FireMonkey libraries.

For example, TBitmap has moved from FMX.Types (in XE4) to FMX.Graphics (in XE5). Thus, you will now need to add FMX.Graphics to the uses list for any of your existing applications that use TBitmap. Similar changes are required for any other controls that were moved to another unit.

The format of FireMonkey styles has changed in order to offer multiresolution support and to simplify style objects and improve performance.

In XE5, each FireMonkey style includes all resolutions. For example:

Each form must use one TStyleBook now, and the old TStyleBook.HiResStyleBook property has been deleted.

In code, you should use only:

For information about FireMonkey styles, see: 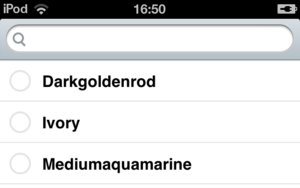 The TListView control has seen some improvements: 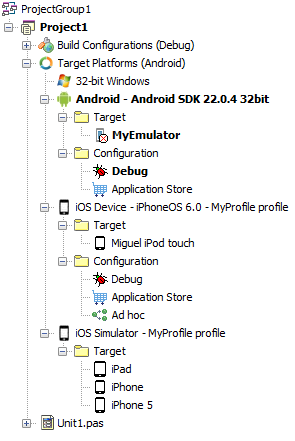 The Target Platforms node in the Project Manager now provides the following two child folders under each target platform:

Depending on the current project, the Project Manager can contain none, one, or both of the Target and Configuration folders. For example, a console application does not contain either the Target or the Configuration child nodes under Target Platforms.

The target platforms that were available in previous releases, such as 32-bit Windows or iOS Device, are still major nodes in Target Platforms.

The iPhone, iPad, and iPhone 5 simulators for the iOS Simulator are now contained in the Target folder under the target platform (iOS Simulator).

The Android target platform is now represented in the Target Platforms node of the Project Manager.

When you create a FireMonkey Mobile Application, you can now select the Android target platforms in addition to iOS Device and iOS Simulator.

You can add Android to your custom run-time packages, and build them for the Android platform, so that your components can be used on Android as well.

Design devices are preset forms that give you an idea of the final look of your form on a certain device or form factor.

If you set the design device that is your eventual target platform, the FireMonkey Mobile Designer loads the correct style for the selected platform.
For example, here are examples of applications using the design device settings of Google Nexus 4 and iPhone 5, respectively:

Changes to IDE Insight for XE5

The IDE Insight dialog box has been replaced by a search box in the upper-right corner of the IDE:

Multiselection on the Deployment Manager

The Deployment Manager now allows selecting more than one file. You can select several files and delete them from the deployment list or change their output path (Remote Path) at one time.

Your project options provide new fields and pages so that you can prepare your new Android applications for deployment:

In XE5 Update 2 RAD Studio includes a new compiler: BCCIOSARM.EXE, the C++ Cross Compiler for iOS Device. Use the C++ Compiler Project Options to configure this compiler within the IDE.

New Delphi Android Compiler: The new Delphi compiler for Android (DCCAARM.EXE) is integrated into the XE5 product: DCCAARM.EXE, the Delphi Cross Compiler for Android.
DCCAARM enables you to compile Delphi applications for either an Android emulator or an Android device.
Like the other Delphi mobile compilers, DCCAARM supports certain language differences, which are described in Migrating Delphi Code to Mobile from Desktop.

The new FireDAC data access layer, which supports the features needed to build real-world high-load applications, has been added to RAD Studio.

The new REST Client Library is supported on all platforms.

WebSnap and InternetExpress, two older tools for Web application development, have been finally deprecated and removed from RAD Studio: As an alternative, use either of these: