Go Up to FireMonkey Application Design

FireMonkey controls are arrangements of a tree composed of subcontrols, primitive shapes, and brushes, decorated with effects. These compositions are defined as styles, stored in a style book. The individual elements of a style are internally called resources; because that term has several other meanings, the term style-resource is used for clarity. Styles provide a great deal of customizations without subclassing.

The FireMonkey styles that are provided with the product are saved in .Style files located in C:\Program Files (x86)\Embarcadero\Studio\20.0\Redist\styles\Fmx. You can load these styles with FireMonkey Style Designer.

In FireMonkey, each control class has a default style, hard-coded per platform. A copy of the internal hard-coded style for a control class is created after you clicked the Edit Default Style command on the control's shortcut menu.

To view or edit the default style: 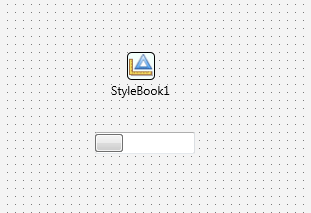 For example, the default style of FMX.StdCtrls.TPanel is defined simply as:

The name of the style-resource that defines the style is "panelstyle". It refers to a TRectangle. The appearance of this rectangle can be changed in the Style Designer, and then every TPanel on the form will have that appearance by default.

However, there is no rule that a TPanel must be represented by a TRectangle. A TRoundRect or TEllipse would work. Even simple controls can be a complex composition.

The style is named so that it can be found and used. In addition, certain subelements are named, so that they can be referenced. When the IsChecked property is toggled, the "checkmark" has its visibility changed (by animating the opacity of its color from solid to transparent). Setting the Text property of the TCheckBox sets the Text property of the underlying TText named "text".

Two properties with similar names form the links between a control, its style, and its subcomponents: 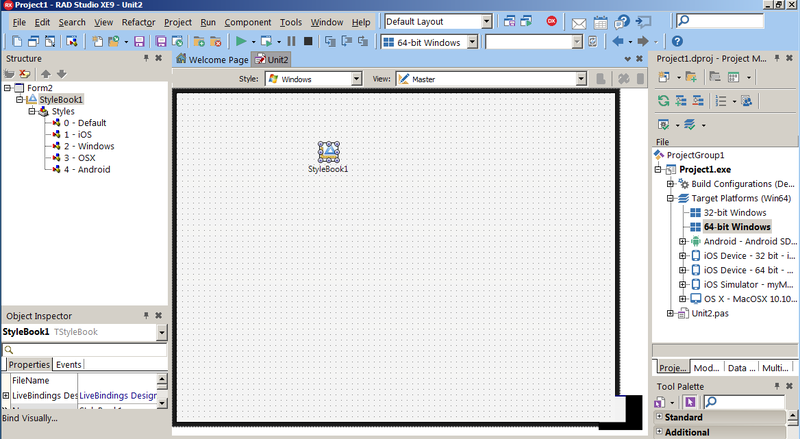 Note: There is also the "Default" platform marker. FireMonkey application loads the Default style when the application cannot find the matching styles for the current platform.

The FireMonkey Style Designer allows you to edit, add or remove styles from a TStyleBook component.

A given TStyleBook component can only contain either custom styles or platform styles.

To open the FireMonkey Style Designer:

The newly created object is set as the form's StyleBook property so that it takes effect for the form.

A form may have more than one TStyleBook object, then the StyleBook property of the form may reference any of these stylebooks, one at a time. Notice that controls in the form can always access any custom style defined in any TStyleBook object used in the current project group.

In FireMonkey, the term platform style refers to a .Style file that contains a set of resources for a platform. To start working with Platform styles, in the Form Designer, double-click the TStyleBook component to open the FireMonkey Style Designer.

In the FireMonkey Style Designer window, you can open an existing .Style file or save current styles to a .Style file, using the

New styles can be created by modifying default styles, or starting from scratch with a single component.

Note: After you add a new platform or change the current platform, FireMonkey automatically recreates the custom style for the target control.

Styles may refer to other styled components. As always, styles are found by their top-level names in the TStyleBook. For example, to use the same gradient:

To find a control style, RAD Studio goes through the following set of steps, stopping at the first match:

Note: FireMonkey generates names of default styles (see Steps 2.2 and 2.3) using the GetDefaultStyleLookupName and GetParentClassStyleLookupName virtual methods. Optionally, you can override these methods to change the name generation algorithm.

Name matching is not case-sensitive. If no match is found, the control has no content and is effectively invisible. The code that depends on finding subcomponents will fail. (That should only happen for incomplete or improperly bundled custom controls, since all built-in controls have corresponding hard-coded styles. Direct descendants of built-in classes would have their base class content; second-generation descendants would be empty.)

Although TForm is not a control or subclass of TStyledControl, TForm is styled. Its StyleLookup property defaults to "backgroundstyle". The default style-resource with that StyleName is a grey TRectangle.

When loaded, the Align property of the resource is set to Contents to fill the form as the background. It is the first object painted, before the form's other children.

Note: If you call the TStyleManager.SetStyle function in the initialization section of a unit on the main project file, before Application.Initialize, then the style is applied to all forms.