Go Up to UML 2.0 Activity Diagrams

An Activity diagram enables you to group and ungroup actions. If an action can be broken into a sequence of other actions, you can create an activity to represent them.

In UML 2.0, activities consist of actions. Actions are not states (compared to UML 1.x) and can have subactions. An action represents a single step within an activity, that is, one that is not further decomposed within the activity. An activity represents a behavior which is composed of individual elements that are actions. An action is an executable activity node that is the fundamental unit of executable functionality in an activity, as opposed to control and data flow among actions. The execution of an action represents some transformation or processing in the modeled system, be it a computer system or otherwise.

The semantics of activities is based on token flow. By flow, we mean that the execution of one node affects and is affected by the execution of other nodes, and such dependencies are represented by edges in the activity diagram. Data and control flows are different in UML 2.0.

Using decisions and merges, you can manage multiple outgoing and incoming control flows.

Use the Object Inspector to adjust action properties, including: 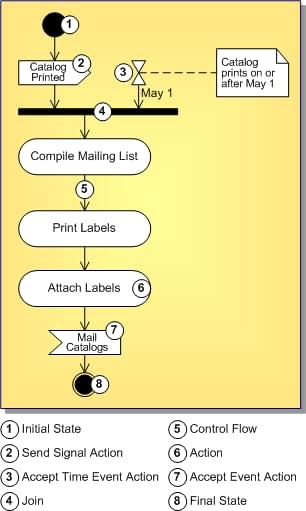