The following query ran for more than a day before I killed it : SQL Query Text Q1
I ran it through Quest's SQL Tuner to see if I could find a better plan, but the basic cases too so long I could get very far.
Then I tried to analyze it with DB Optimizers VST diagrams.
Laying it out in a Visual SQL Tuning (VST) diagram gives: 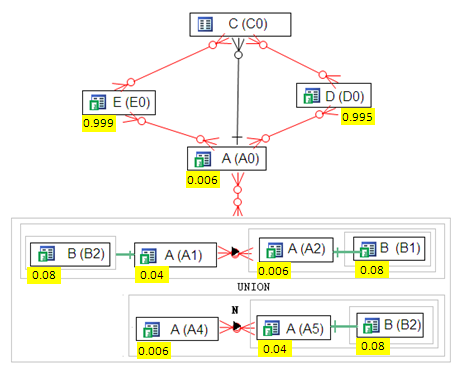 Immediately we can notice some unusual things about the query such as table A is used 5 times and table B is used 3 times, but I analyzed this query without know what, why or how the had made it. The diagram in it's default state has a fair bit going on, but we can eliminate a lot. For starters we can eliminate all the

Type joins. In these cases, the table B has a subquery on it (denoted by the gray box around it) and only one row is being selected. In this case the select on B acts as a filter on A, so we can just eliminated it from the diagram as it won't change the actual execution plan because it can't be merged and it has to be run before we can select on A. Thus let's eliminate all the selects on B of this type giving us: 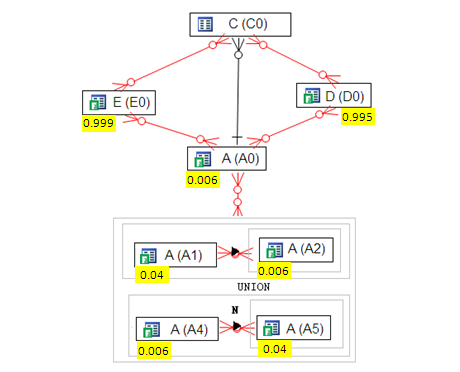 Now we can go farther simplifying the query because UNION has to be executed before joining into the rest of the query. Oracle, as of now, AFIK, has no way of merging a UNION inot the main query (I ran this by Benoit at Oracle who confirmed)
But the UNION doesn't have that much interesting going on. We have an outer join between A1 and A2 and a NOT EXISTS between A4 and A5. We can vary how we do these joins, but the big question of join Order is mute because there are only two tables. Thus we can farther simplify the query as: 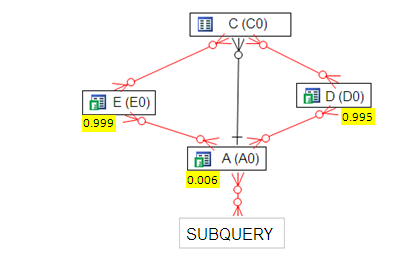 Now the question is where to start the join. It's pretty clear that we start at A (A0) because it has the most selective filter returning only 0.006 of the table. We can then join to C (C0) to play it safe. To know where to go from here we have to have more information, but with this starting point we have made the most important decision in the execution plan. 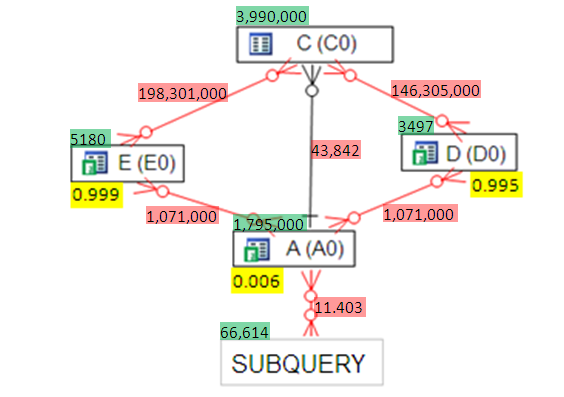 Light green is the table sizes which aren't need for the analysis but are interesting for discussion.
Light red is the TWO TABLE JOIN (TTJ) sizes.
From the TTJ sizes we can see it's a horrible idea to join (E,C) or (D,C) at the start of the query.
On the other hand the best join is (A,SUBQUERY) the to C. 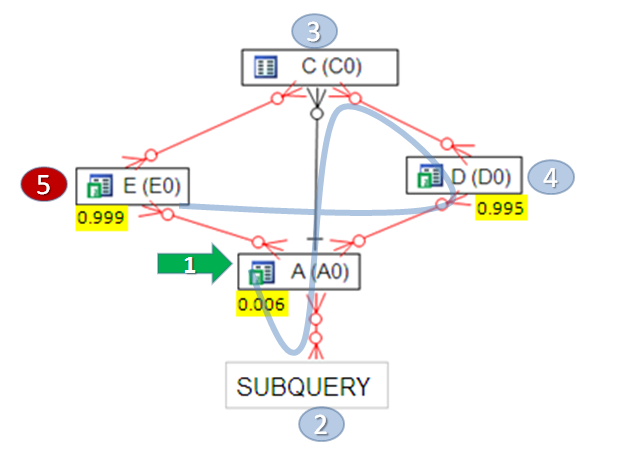 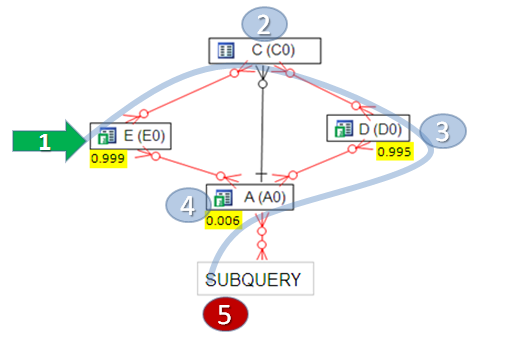 Which is clearly wrong because it starts with the worst join possible.
Oracle's default path took over a day, where as the new path took 30 seconds.

We can compare the plans side by size which even at the small size above enables the viewer to see some big differences. 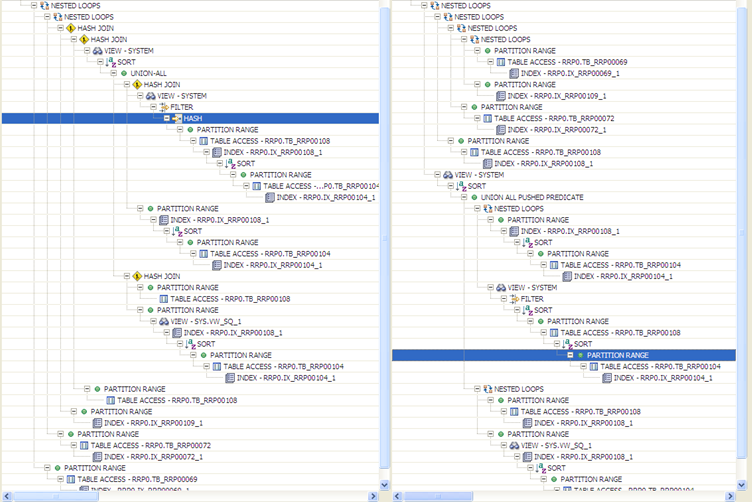 where as the text comparison is quite difficult and tedious. 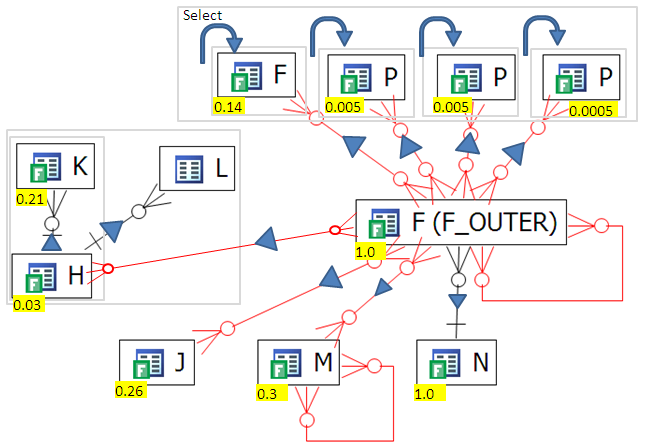 There are two interesting things about this diagram.

There are two things to check - what is the effect of the OUTER JOINS. The OUTER JOINS can easily mean that all joins into F_OUTER don't change the result set size. Let's confirm by looking at the TTJ sizes: 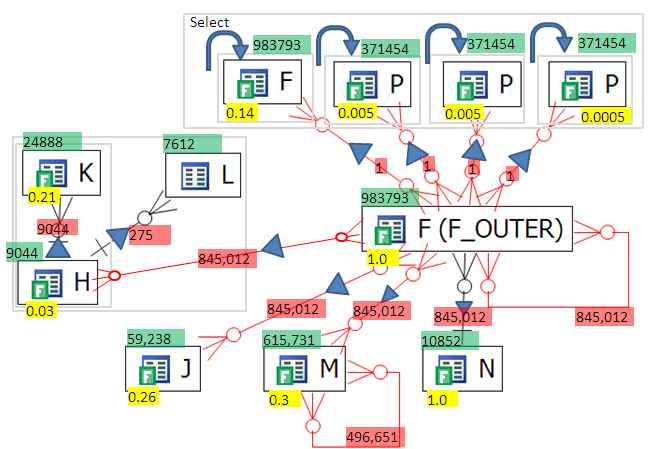 The only thing that bounds the number of rows returned by F_OUTER is it's self join (the line going in and out of F_OUTER) on the bottom left of F_OUTER.
What this means is that it doesn't matter what order we join tables into F_OUTER.
Now we can turn to the other interesting thing about the query. There are 4 correlated subselects in the select clause. These queries in the select clause are called "scalar subqueries." These scalar subqueries can be a bad idea or a good idea depending on how mainly on how many distinct values are used as input into the them.

- looks like I might have spoken too soon! more research to do but looks like Oracle can merge these scalar subqueries even with the case statement. I will try to run some more tests . To be continued)

In the worst case scenario the scalar subqueries are going to be run 845,012 times - that is one heck of a lot of work which would be a BAD IDEA. 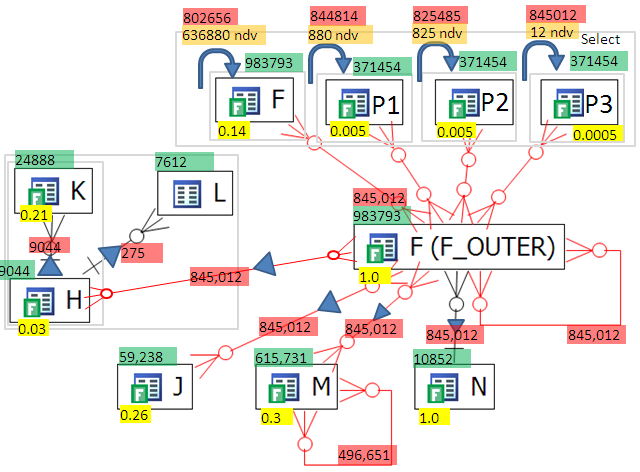 select CASE WHEN F.f1 IS NULL

THEN NULL
ELSE (SELECT X.f2

select CASE WHEN F.f1 IS NULL

( NOTE: the first query will break if the correlated sub query returns more than one value where as the second query will return the multiple rows.)

The VST diagram can't tell you that this is the solution, but they can point out that the place to spend your time is the subqueries in the select.

This is a simple query compared to Query 1 and Query 2. The diagram looks like 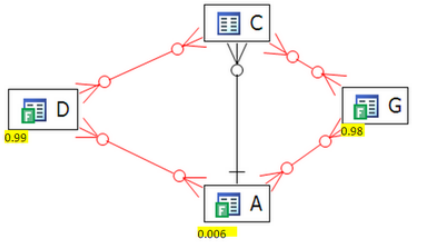 By default Oracle chooses this path: 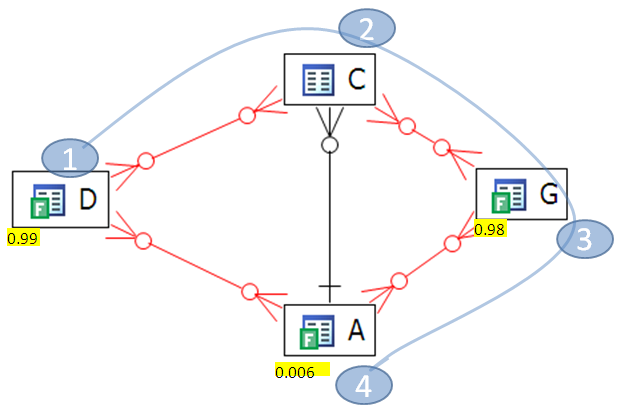 As we can clearly see, this is the wrong path. Why? Because, as previously blogged about, Oracle starts the join on table D who has a non-selective filter returning 0.99 of the table. A more optimized path would be 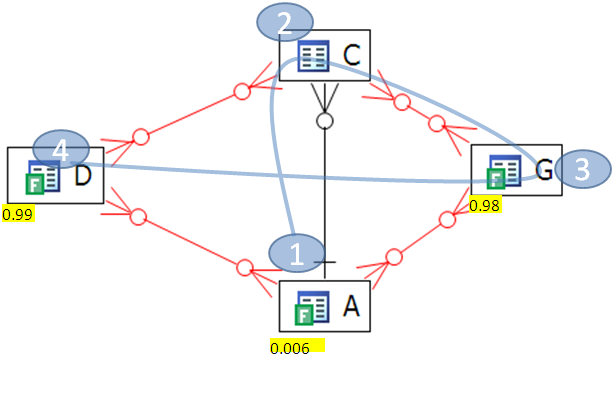 We start at the table with the most restrictive filter, table A, whose filter returns 0.006 of the table. This path is much better than the first path.

Let's look at the extended VST stats on the diagram to confirm our ideas: 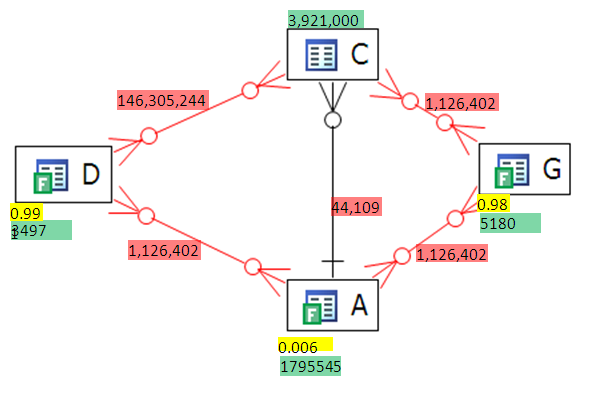 It's clear that the first join should be (A,C) because it give us the smallest running row count at the beginning of the execution path. (yellow is filter ratio, green is rows in table and red is the resulting join set size between tables including using the filters)

Now let's look at the query more closely. There is actually a connection from G to D that we can get through transitivity. Here we can see the transitivity (the yellow highlighted fields are the same in D, G and C). 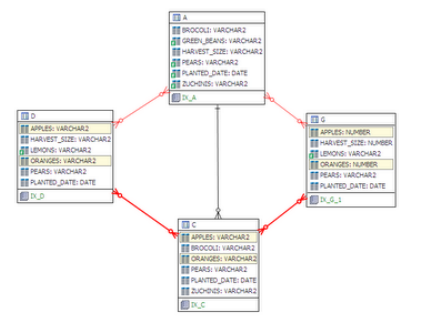 D.apples=C.Apples and C.Apples=G.Apples
same can be said for oranges, so our VST diagram actually looks like: 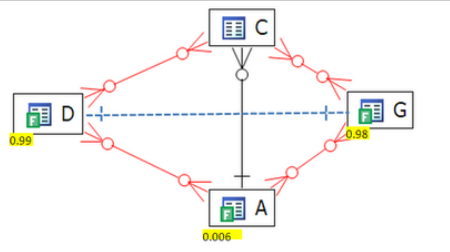 The transitivity brings to light a lurking ONE-to-ONE relationship between D and G! Thus a join between D and G will return at most min (D,G) rows and maybe less. Let's see what the row counts are: 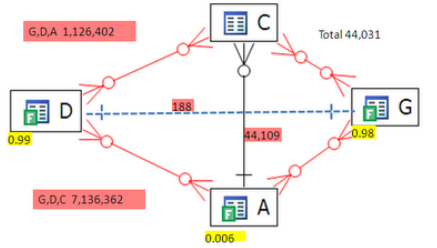 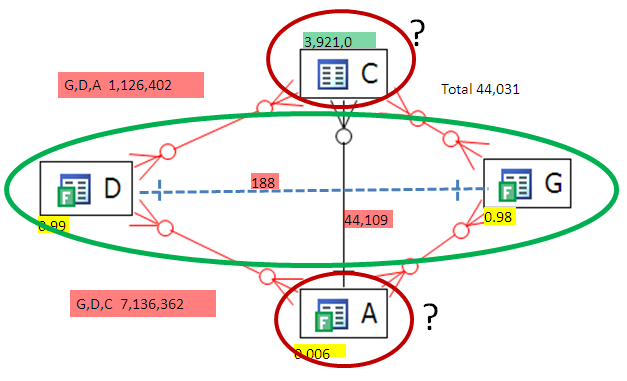 A big result sets where as the result form A to C is only 44K. How can we take advantage of the low result set from (G to D) and (A to C) at the same time? The answer is to make subqueries that force Oracle to evaluate them separately and then join the results sets: 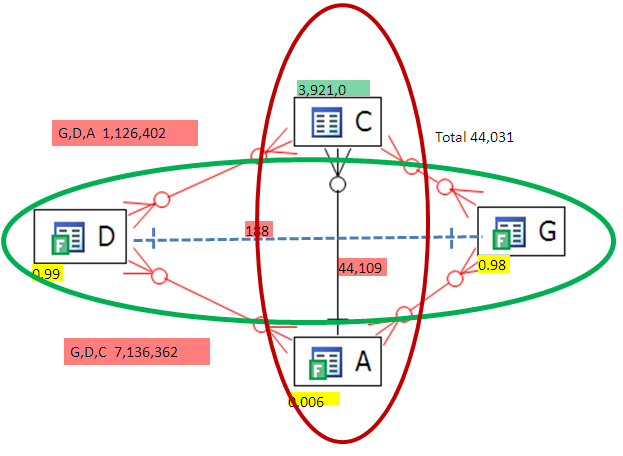 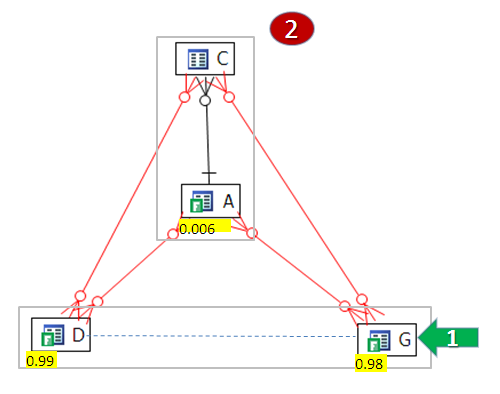 It doesn't really matter where we start. We join (G,D) and separately we join (C,A) then we join these two result sets.\

This final version runs in

down from an original

Tuning this query manually by an average developer or DBA would take hours., an expert could maybe do it in less than an hour, and a junior analyst might not be able to tune it at all. On the other hand the query can be tuned in minutes with VST diagrams which include join filters, 2 table result set sizes and analysis of transitivity.
The VST relies filter ratios and 2 table join result set sizes works well. For queries where even the 2 table results take too long, such as a multi-day data warehouse query there are other ways to estimate the join result set and filter ratios. We will explore some of these methods in future posts.

With this diagram we have a good idea of the join path. Start at A which has the most selective filter then join to C by the shortest path with is B. This join path (A,B,C) lays the foundation for a good join path.
The actual best path is A,F,B,G, C, D, E but to know that we we need more information which is the TTJ sizes.
It's helpful to know the query returns about 2000 rows (which are summed and grouped by to output one row) so we should be able to prune the "running row count" down and keep it down.