Go Up to COM Servers

With COM, a client does not need to know where an object resides, it simply makes a call to an object's interface. COM performs the necessary steps to make the call. These steps differ depending on whether the object resides in the same process as the client, in a different process on the client machine, or in a different machine across the network. The different types of servers are known as:

As shown in the following figure, for in-process servers, pointers to the object interfaces are in the same process space as the client, so COM makes direct calls into the object implementation.

Note: This is not always true under COM+. When a client makes a call to an object in a different context, COM+ intercepts the call so that it behaves like a call to an out-of-process server (see below), even if the server is in-process. 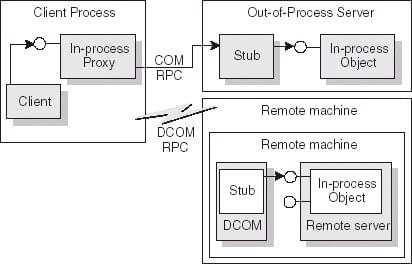