Go Up to Programming with JDBC

As an all-Java JDBC driver, InterClient enables platform-independent, client/server development for the Internet and corporate intranets. The advantage of an all-Java driver versus a native-code driver is that you can deploy InterClient-based applets without having to manually load platform-specific JDBC drivers on each client system. Web servers automatically download the InterClient classes along with the applets. Therefore, there is no need to manage local native database libraries, which simplifies administration and maintenance of customer applications. As part of a Java applet, InterClient can be dynamically updated, further reducing the cost of application deployment and maintenance.

InterBase developers who are writing new Java-based client programs can use InterClient to access their existing InterBase databases. Because InterClient is an all-Java driver, it can also be used on the Sun NC (Network Computer), a desktop machine that runs applets. The NC has no hard drive or CD ROM; users access all of their applications and data via applets downloaded from servers.

The InterClient product consists of a client-side Java package called InterClient, which contains a library of Java classes that implement most of the JDBC API and a set of extensions to the JDBC API. This package interacts with the JDBC Driver Manager to allow client-side Java applications and applets to interact with InterBase databases. 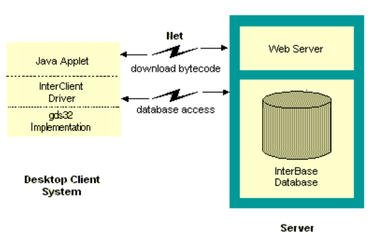