Go Up to Arranging FireMonkey Controls

FireMonkey layouts are containers for other graphical objects that can be used to build complex interfaces with visual appeal. The FireMonkey layouts extend the functionality of TControl to control the arrangement, sizing, and scaling of their child controls, and offer the possibility to manipulate a group of controls as a whole.

Using properties like Position, Align, Margins, and Padding with Anchors and layouts can result in complex interfaces without explicitly using complex calculations. 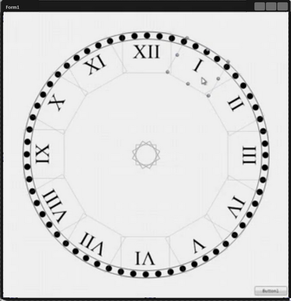 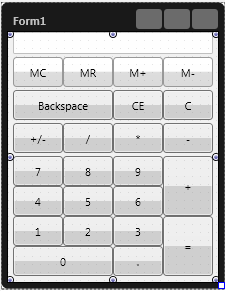 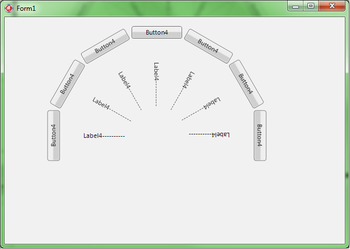 The available layouts can be found in the Tool Palette, under the Layouts category.

To use a layout, just drag and drop the layout from the Tool Palette to the form. 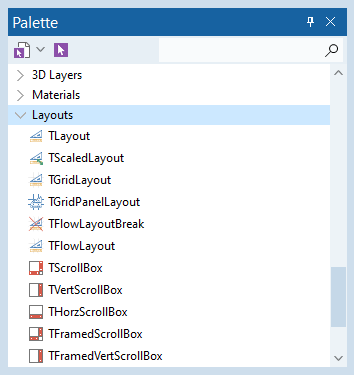 FireMonkey layouts can be split into several categories:

A simple container is not visible at run time and can be used to group other controls to be manipulated as a whole. For example, you can set the visibility of a group of controls at one time by setting only the Visible property of the layout. TLayout does not set automatically any of the properties of its children.

To obtain complex interfaces using TLayout, use more than one layout and the arrangement properties of the child controls of the layouts and of the layouts themselves. For example, an easy way to obtain a circular distribution of controls is to set the initial location for a TLayout with the controls inside, and then copy and paste the positioned layouts, keeping the same location and changing the RotationAngle.

A scaled layout is a container that offers the possibility to scale a group of graphical objects according to the physical dimensions of the layout. The child controls stretch along with the layout when the layout is resized. TScaledLayout keeps its original size through the OriginalWidth and OriginalHeight properties.

A scroll layout offers the possibility to scroll groups of graphical objects. You can use scroll boxes to create scrolling areas within a form. These areas are known as views. Views are common in commercial word-processor, spreadsheet, and project management applications.

A simple TScrollBox is not framed, and at run time the child controls and scroll bar are visible, without any visible delimitation on the top and left side of the scrolled area. To delimit the scrolled area, use TFramedScrollBox. 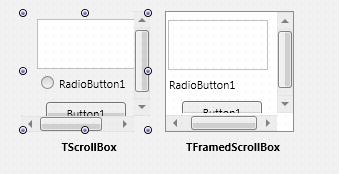 We provide the FMXTAniCalculations code example to demonstrate how to set scrolling properties programmatically.

TFlowLayout arranges its child controls as if they were words in a paragraph.

However, you can customize sizes of buttons using the Margins properties of child controls. For example, the following image demonstrates the usage of different margins for Button5, Button6, Button7, and Button8 child controls: 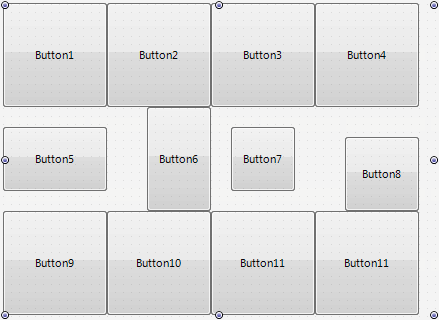 Here we set:
Look how child controls are resized and positioned inside respective grid cells.

When using the TGridLayout layout, the Position, Align, and Anchors properties of the child controls are automatically set. Changing these properties explicitly is ignored. 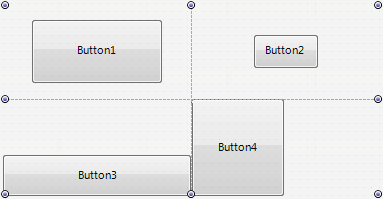 Using the TGridPanelLayout layout, you can specify that a child control can span on several cells. For example, look at the following figure: 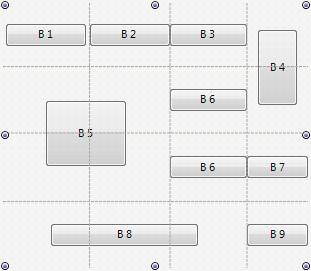 To specify that a child control can span on several cells you can use the following trick:

In many cases, the net effect is a faster refresh of the UI of the control. However, the use of TBufferedLayout on large surfaces may have a negative consequence in terms of memory usage, and that is why this behavior is not part of the core library

To group and arrange 2D objects in a 3D application, use FireMonkey layouts within TLayer3D or TTextLayer3D.

After adding a layer to the 3D form, arrange the 2D controls using layouts as in a 2D application. 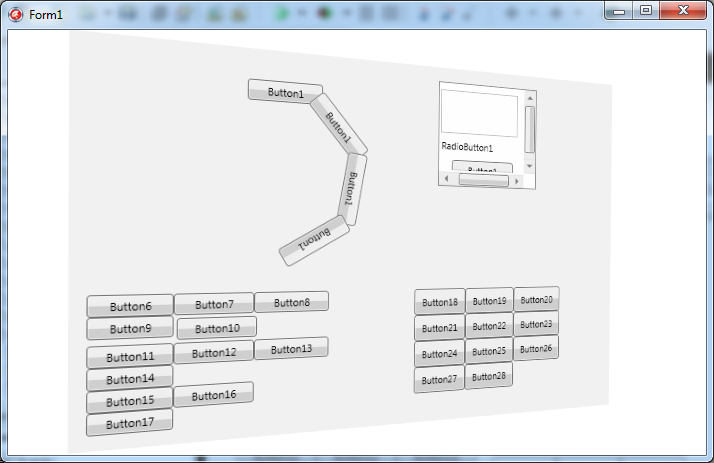