Go Up to Getting Started with RAD Studio

To shift focus to the Form Designer when you have a visual project open in the IDE, click the Design tab at the bottom of the main editing window:

Note: You can open the Code Editor and the Form Designer window for the same unit at the same time through New Edit Window. When you create an event in the Object Inspector or double-click an event handler, the code editor window will scroll to the event location, and the form designer window will remain the same.

The appearance and functionality of the Designer can change, depending on the type of form you are creating or editing. For example, if you are using an HTML Element, you can display the HTML Tag Editor in the Designer by selecting View > Tag Editor.

The multi-device Form Designer includes a Style Selector that chooses the basic design-time platform style used in the Master view. The styles are based on the platforms that a multi-device application can target:

Select the style of the Master view at design time to show all properties related to the selected style/platform. For example, if you want to define the StyleLookup property of a TButton for an Android device, select the Android style; notice that the options available in the drop-down menu of the Object Inspector for the StyleLookup property contains selections for an Android device.

The multi-device Form Designer includes a View Selector, a drop-down menu that shows all the Available views that represent different devices, such as specific iOS, Android, Windows and OS X devices. After you select views from the Available list for your project, the views are added to the Created list. See Using FireMonkey Views. 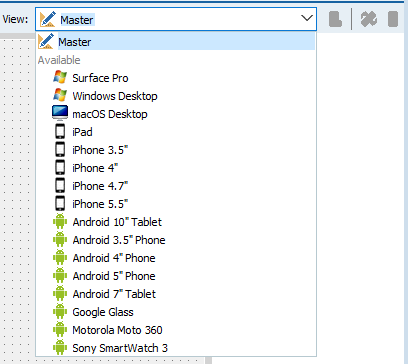 You can add visual components to your multi-device or VCL form by dragging selected components creating from the Tool Palette, located in the lower-right section of the IDE, onto the form. These are the components that will be visible to the end user at run time. The objects available on the Tool Palette change dynamically, depending on the type of application or form you are designing.

For visual and nonvisual components in the Form Designer, you can view and set properties and events by using the Object Inspector.

Nonvisual components such as a GestureManager are attached to the form, but they are only visible at design time; they are not visible to end users at run time. You can use nonvisual components as a way to reuse groups of database and system objects, or isolate the parts of your application that handle database connectivity and business rules.

The IDE allows you to hide or show non-visual components at design time.

Use the HTML Designer to view and edit Web Forms or HTML pages. You can change the default layout in the HTML Designer to be either 'Grid Layout' or 'Flow Layout'. Choose Tools > Options and then select HTML Options from the tree on the left side. Now you will see the Default Page Layout Options that allows you to select either the Grid Layout or Flow Layout option. This Designer provides a Tag Editor for editing HTML tags alongside the visual representation of the form or page. You can also use the Object Inspector to edit properties of the visible items on the HTML page and to display the properties of any current HTML tag in the Tag Editor. A combo box located above the Tag Editor lets you display and edit SCRIPT tags.

When you right-click a form in the Form Designer, the context menu is displayed. The context menu commands are available for both VCL and FireMonkey, unless otherwise noted in the following table.

Shortcut Keys on the Form Designer

The following shortcut keys can be used to move and resize the components on the Form Designer.