From DBArtisan
Jump to: navigation, search

Go Up to Overview and common usage of object editors

There are two categories of tasks you can perform using an Object editor:

Work with Tasks and Settings of Specific Object Types

Work with Tasks and Settings Common to Object Editors

The following tasks can be performed against many of the supported Object editors:

It provides the following functions:

Commands on the Object editor toolbar are disabled if they do not apply to the object type being viewed or modified.

Opening Another Object in the Same Object Editor Explorer

When an object editor is open, the area between the object editor toolbar and the tabs has one or more dropdown lists. For example:

To display the information for another object of the same type

Viewing the SQL/DDL for an Object

The object editors for most object types feature a DDL tab that lets you view an object’s underlying SQL code.

To view the underlying DDL/SQL for a database object

Working with Privileges and Permissions

When you open an Object editor on an object with associated privileges, the Permissions (or Object Permissions or System Permissions) tab for that editor displays the relevant privileges and lets you make changes accordingly: 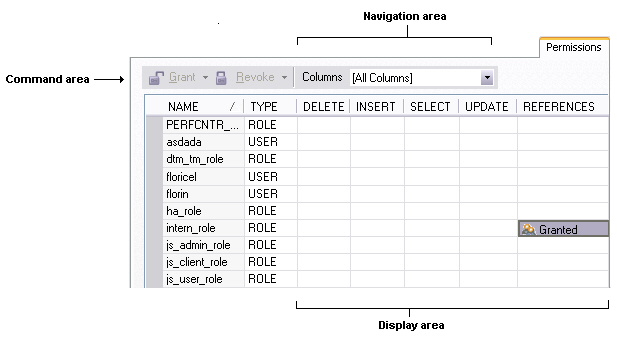 The Command area lets you initiate granting or revocation of permissions.

To view or modify privileges using an Object editor 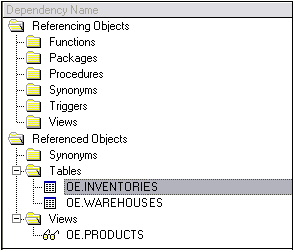 In addition to letting you view dependencies, Object editors let you drop a referencing or referenced object, or open an Object editor on that object.

To manage dependences for an object

The object editors for certain object types feature a Comment tab that lets you add an explanatory note to specific object definitions. Comments are stored in the REMARKS column of the object’s system-catalog.