The Code Editor is a full-featured source code editor for web programming languages, available on the Code view when working on several types of web-based documents.

The Code Editor and the Designer can be used combined, since both are synchronized: changes on one of them are immediately reflected in the other, so you can combine the ease of visual development with the flexibility of source code edition.

Bookmarks allow you to set a mark on a specific location of your source code and return back later. You can set up to 10 bookmarks (0-9).

To set a bookmark, follow any of these methods:

) with the bookmark number will be shown on the gutter. You can then get back to that bookmark at any time with any of the following methods:

To unset a bookmark, set it again on the same line, or set it to a different line directly. 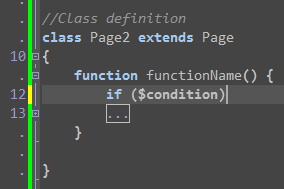 Example of the code folding and tracking band features.

The Code Folding feature lets you collapse (hide) or expand (show) any block of code (those delimited by {}) to ease code navigation and readability.

You can get your source code automatically formatted using the source code formatter: Right-click on the Code Editor and click on Format Source.

The Code Editor’s code completion tool, Code Insight, helps you write your code easier, faster, and with much more precision, by assisting you in the selection of properties and methods. You can trigger this tool pressing Ctrl+Space.

Error Insight checks your PHP code for syntax errors, and marks them, both on the Code Editor itself, by underlining the erroneous code in red, and on the Structure widget, listing the errors and their location.

You can record a specific set of actions (macro) in the Code Editor and repeat them with just one click later. Use the macro buttons for that, they are located on the bottom-left corner of the Code Editor.

The gutter during debug.

The gutter is a vertical bar at the left-most side of the Code Editor that helps you manage breakpoints (for debugging).

The Code Editor has a context-aware toolbar that gives you access to several code edition actions:

Note: There is also the Main Toolbar, which provides additional general-purpose actions.

On the left margin of the Code Editor, between the line numbering and the code folding, there is a thin column called the tracking band. This column has a different color for each line of code, depending on the state of the code in the line.

That way you can have a better control of the parts of the code you’ve been working on.

You can customize Code Editor from Home > Options > Editor Options and any of its child items in the tree view.

From Home > Options > Editor Options you can change the following general-purpose settings:

Under Default settings for new files:

From Home > Options > Editor Options > Source Options you can customize the way the Code Editor behaves for different types of files.

You can customize the appearance of the Code Editor (visual helpers, text font, etc.) from Home > Options > Editor Options > Display.

You can customize the style to be used for the different types of elements on your source code from Home > Options > Editor Options > Color. You can select a predefined style from the Color SpeedSetting drop-down list. Then, to customize any element, select the target element on the Element drop-down list, and define its style:

Foreground Color
Color to be used for the element itself, as opposed to its background.

Background Color
Color to be used for the background of the element.

To define a default foreground or background color for any element, use the Whitespace element. If a color on an element is set to None, its actual value will Whitespace’s.

The foreground color and background color of the Modified line element are the colors used to mark lines modified since the last time the file was saved to disk and lines modified and saved during the current session, respectively.