RAD Studio supports development on ARMv7 and AArch64 devices that run in the Android operating system versions detailed in the Supported Target Platforms.

RAD Studio targets the most common CPU architecture for the best performance on the largest number of devices possible.

We recommend the following devices for debugging Android 64-bit applications. There are many Android devices created by many manufacturers, and the experience or ability to successfully debug an application on a device can vary widely. You should test a device to ensure it supports debugging. In general, Android devices with stock, unmodified Android, and provided by the major vendors are most likely to work well; devices with unusual hardware changes to Android may have issues debugging. The following devices are a sample list recommended for debugging Android 64-bit applications.

To debug a 64-bit application, your device must run a 64-bit version of the Android operating system.

Note: A device appearing in this list is not a guarantee of supported debugging, since this can change from device to device and across operating system versions and point releases.

To run Android 64-bit applications on your device, there are two conditions it needs to match:

However, some devices are not configured to use the 64-bit mode. If the device does not support a 64-bit native application, an error message is displayed.

When attempting to debug a 64-bit app from within the IDE on a target device that does not support a 64-bit application, an error message is displayed.

How to verify your Android device can run 64-bit apps

If you want to verify your Android device's CPU can run 64-bit apps, one option is to use existing applications on the Play Store, such as:

If it indicates your CPU has a 64-bit ARMv8-A instruction set, but it is set in 32-bit mode, it implies the Android version is not 64-bit. In case of a mismatch, at the moment, you will get the INSTALL_FAILED_NO_MATCHING_ABIS error message. 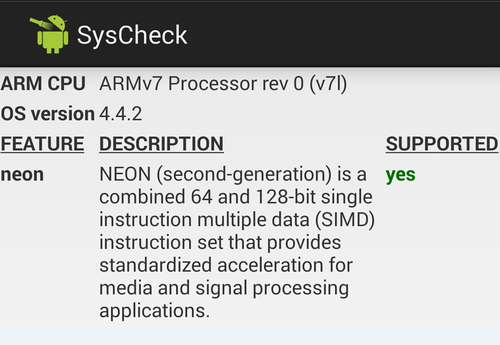 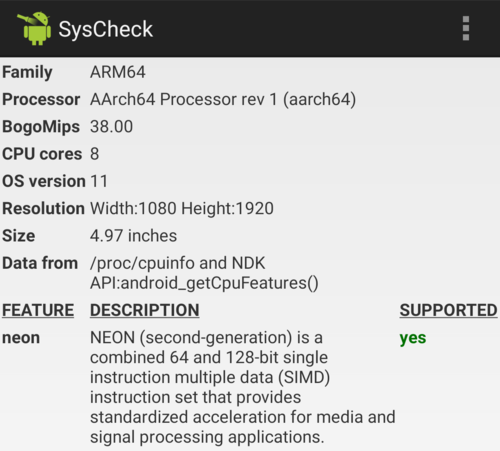 Attention: Embarcadero does not have information about the application's origin, and cannot guarantee the apps are malware free.