Go Up to Customizing FireMonkey Applications with Styles

The FireMonkey Style Designer has its own Object Viewer that works with the RAD Studio Structure View and Object Inspector. The Structure View, which is located by default in the upper-left corner of the IDE window, displays a tree view of the individual components of the selected control (object).

For example, the following screenshot of the MetropolisUIFlipViewDemo sample shows: 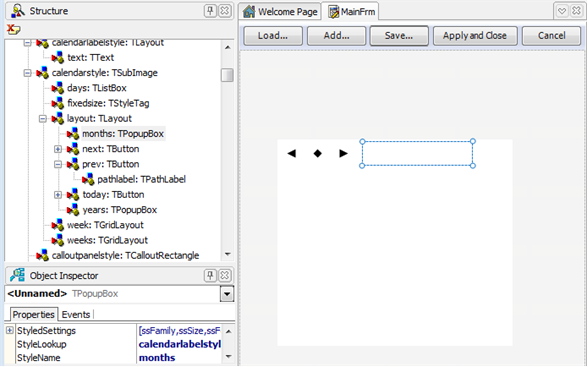 Tip: To create a new style or to add an existing style to the style of a component, drag and drop a control from the Tool Palette to the Structure View.

The Object Inspector, located by default in the lower-left corner of the IDE window, displays the properties (and events) associated with the component currently selected in the Structure View. To set or change a component's properties, make the changes here in the Object Inspector.

In the following example, there are two styles being edited, one for TButton and one for TRadioButton.