This tutorial describes a general strategy for using the Master view for different form factors (such as phone or tablet), without using different views for each form factor.

Every FireMonkey Component Can Have an Owner, a Parent, and Children

First, every FireMonkey component has the idea of Owner, Parent, and Children. If you place a component on a form, the form becomes the owner and parent of the component.

The Layout for a child is defined as a value relative to its parent. In the following picture, Label1 is the child of Toolbar1, and the Layout of Label1 is relative to Toolbar1.

A control's Align property determines whether it is automatically repositioned and/or resized along its parent's four sides or center, both initially and as the parent is resized.

The default value for the Align property is None, which means that no automatic calculations are performed: the control stays where it is placed:

Typical values for the Align property are as follows (Dodgerblue indicates the area for the child):

If you use an Align value of Top, Bottom, Left, or Right for one component, the Align properties for other components use the remaining area.

The size and shape of the remaining area (Client) also changes based on the orientation of the device, and based on the form factor (iPhone or iPad).

The following pictures show the layout for landscape (horizontal) and for portrait (vertical) when you have two (2) components that use Top, and one (1) component that uses Client. Margins ensure separation between controls automatically positioned by a parent.

In the following picture, the right side of the component (Align = Client) uses the Margins property to ensure space around the component. Padding sets aside space on the interior of the parent's content box. In the Object Inspector, you can set values (in pixels) for the Padding: 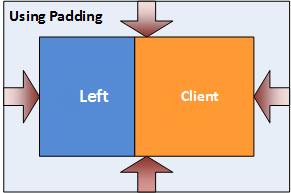 Anchors Property for the Edit Control

If you have an Edit control on top of a ToolBar, you may want to keep a fixed distance between the right edge of the Edit Control and the edge of the form (ToolBar). Anchors enable you to specify that a control is to remain fixed in relation to the sides of its parent.

TLayout, a component that is not visible at run time, can be used to group its child controls to be manipulated as a whole. For example, you can set the visibility of a group of controls at one time by setting the Visible property of the layout. TLayout does not automatically set any of the properties of its children.

You can use Align, Padding, Margins, Anchors, and other properties of TLayout to define the layout for a specific area. You can use the TLayout component just like the DIV tag in HTML.