This topic describes how to create a "Hello World" multi-device application (C++ or Delphi) for either the iOS or Android target platform.

To develop mobile (iOS and Android) applications using RAD Studio, you need to complete some important configuration steps. This tutorial assumes that you have completed all the necessary setup steps.

Step 1: Create a New FireMonkey Application for Android or iOS

We recommend that you read this tutorial before you start placing components: Mobile Tutorial: Using Layout to Adjust Different Form Sizes or Orientations (iOS and Android).

The first step in creating a multi-device application is designing the user interface. There are many reusable components available in the IDE for creating user interfaces.

The Code Editor displays the source code that the IDE has generated. You should find three components defined (Edit1, Label1, and Button1):

Note: When you save or run your project, the uses and include clauses are updated (to add FMX.StdCtrls for TLabel and FMX.Edit for TEdit).

Step 4: Adding Views to Your Project

If you want to customize you application for a particular type of device, you can do it using Views.

To add a customized view, see Adding a Customized View to the View Selector.

Step 5: Write an Event Handler for a Button Click by the User

Double-click the button on the Form Designer, and RAD Studio creates skeleton code that you can use to implement an event handler for the button click event:

Now you can implement responses within the Button1Click method.

The following code snippets (Delphi and C++) implement a response that displays a small dialog box, which reads "Hello + <name entered into the edit box>":

While you are typing code, some tooltip hints appear, indicating the kind of parameter you need to specify. The tooltip hints also display the kinds of members that are supported in a given class:

The implementation of this application is finished, so now you can run the application.
You can click the Run button (

) in the IDE, press F9, or select Run > Run from the RAD Studio main menu:

Test Your Android Application on the Android Device

If you complete the steps described in Mobile Tutorial: Set Up Your Development Environment on Windows PC (Android) before creating your new project, you can now run your Android app on an Android device connected to your PC by USB cable. 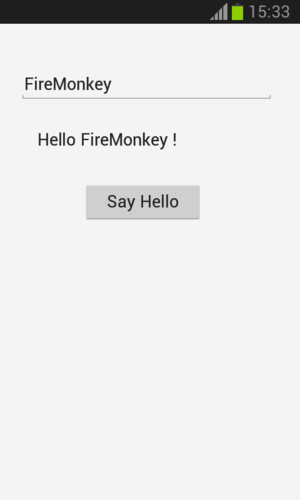 Testing on the Mac (iOS Simulator)

When you run your application, it is deployed to the Mac and then to the iOS Simulator on the Mac. For our app, a form with an edit box and a button is displayed. Enter text into the edit box, and click the Say Hello button: 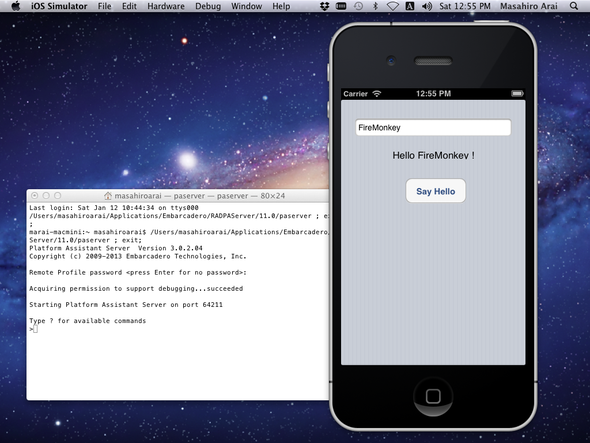 Note: On the iOS simulators, you can test only your Delphi applications.

Testing on a Connected iOS Device

After you select the appropriate iOS Device target platform, run your iOS app by clicking the Run button in the IDE, pressing F9 or selecting Run > Run.

On your Mac, you might see a dialog asking your permission to code sign your iOS app. Select either "Always Allow" or "Allow" to sign your app.

Then go to your iOS device and wait for your FireMonkey iOS app to appear. Watch for the FireMonkey launch image (the icon is available in $(BDS)\bin\Artwork\iOS, and you can set the launch image in Application Options):